Invicta is one of the few brands that have over the years remained consistent in terms of quality, sophistication, and uniqueness.

The Pro Diver Series from the brand is the perfect choice when you want to plunge into the deep waters while still wearing your favorite timepiece.

There are lots of Pro Diver Series models in the market; something that makes it hard to identify the ultimate model to settle for. The Invicta 17045 and 8928OB models are some of the common models that are confusing to most people.

In this article, we will highlight all the similarities and differences between the two models so that you can make the right choice on the best model for you.

Read on to know how these two watches are similar to each other as well as the differences that set them apart.

Table of Contents Hide
1 Invicta 17045 vs 8928OB – Quick Comparison
2 The similarities between the two models
3 How do the two models differ?
3.1 Movement
3.2 Case plating
3.3 Pricing
4 Which model is better?
5 Conclusion
5.1 Related Posts 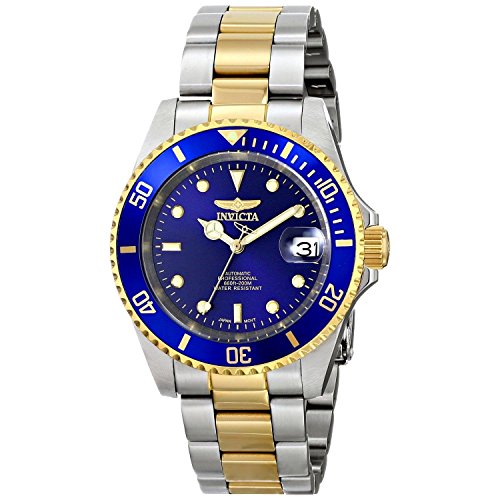 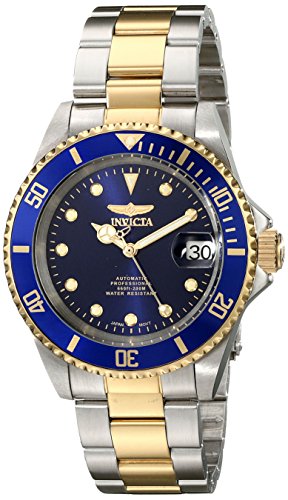 The similarities between the two models

Since the Invicta 17045 and 8928OB come from the Pro Diver Series, it is obvious that they share several similarities.

The number one similarity between these two models lies in their appearance and design.

These watches are quite similar in their appearance.

This large case is a common similarity among pro diving timepieces.

The silver band in both models features a two-tone décor (Silver & yellow gold-plated).

The bands come with a fold-over clasp for fastening the bands onto the wrist.

The other similarity in these timepieces is seen in their dial.

Both models come with a blue analog dial.

In both watches, there is a date window at the 3 o’clock position.

The water resistance in both models is 660 feet, thereby making both watches ideal for serious surface water sports and professional marine activity.

However, you should not use any of the watches for scuba diving.

Both models feature a coin-edge bezel that is similar to the bezel in high-end diving watches like the Rolex Submariner.

Another unique similarity between these two Invicta timepieces is their movements.

Both models run on a Japan Automatic movement.

Therefore, these timepieces eliminate the need of using a battery or manual rewinding to run.

How do the two models differ?

These models have several differences that set them apart.

Some of these differences include:

Both models run on automatic movement but with different calibers.

The Invicta Pro Diver Series 17045 is powered by a Precise 24 Jewel caliber in its Japanese automatic movement.

This caliber is popular for enhanced accuracy, reliability, and precision as compared to the NH35A caliber in the 8928OB model.

The high-end caliber in the 17045 model is robust and has a power reserve of up to 41 hours.

The NH35A caliber in the Invicta 8928OB watch has a 36 hours power reserve and is also popular for its accuracy, reliability, and precision.

The caliber also has a sweeping seconds hand functionality that is common in high-end and luxurious timepieces.

The two calibers in the Japanese Automatic movement are developed by Seiko Instruments Inc (SII).

Seiko is the leading manufacturer of luxury watch movements.

As such, the calibers in these movements are fluid, consistent, and dependable just like in luxury timepieces.

The gold-ion plating on the stainless-steel casings in the two models is different.

The plating in the 17045 model is done using 18K gold while in the 8928OB model, 23K gold is used for plating the stainless-steel case.

While the difference in plating does not have any effect on the performance of the timepieces, it only affects the appearance of the two models.

The other difference between these two models is seen in their pricing.

The 8928OB model is slightly expensive compared to the 17045 model.

However, it is important to note that the Invicta Pro Diver Series 8928OB is designed uniquely to deliver the best diving experience to all its users.

The features and functions offered by the 8928OB model make the timepiece to be a worthy purchase.

Which model is better?

The 8928OB model is our top preference, no doubt.

The model has a classic 23K gold plating, corrugated unidirectional bezel, and luminous hands and markers for excellent visibility in poor lighting.

The see-through case back of the watch enhances its appearance as well as the user experience.

Once you have read through our detailed comparison guide between the Invicta Pro Diver Series 17045 and the 8928OB model, choosing the perfect watch for you should be straightforward.

While these models share striking similarities, there are also a few differences between the two models.