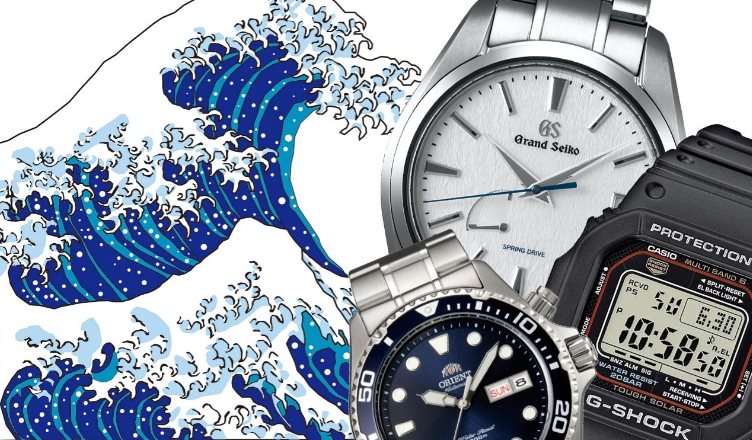 While the country best known for watches is most certainly Switzerland, the watch market in the second half of the 20th century was dominated by Japan.

We have made a list of Japan watch brand names:

Casio did not jump right to watches in the beginning. Rather than that, the company once focussed on electronics like calculators. It was not until the Digital Revolution that the Casio started taking part in the watchmaking industry.

The first wristwatch of Casio was the 63064 Casiotron – an electronic Japan movement watch. It is famous due to its special features. Using this electric watch, the owner can use the chronometer and have an LCD time display.

In the beginning, this brand was an independent watch company called Tama Keiki. Till 1951, it was renamed to the Orient Watch Company.

The first Orient Star wristwatch was brought to the market not long after that, and this was the first footstep to the success of this company

This Japanese movement watch brand mainly produces mechanical watches with self-winding and manual-winding. Besides, it also provides many watches with different models like quartz, radio-controlled, light, and solar.

One of the products the company takes pride in is the EU07007F Orient Mechanical Sports 44 watch. This watch is designed with a multi-year perpetual calendar and luminous hands on the green dial. In addition, this watch even works well when its user dives for a depth of 100 meters underwater.

Citizen is one of the best Japanese watch brands. You might not know this, but it is actually among the country’s leading figures in providing watches with high technology.

For example, its Citizen Eco-drive collection has a special watch that doesn’t require a battery or winding to run. Besides, Citizen is also proud of its Citizen Satellite Wave collection. Using GPS satellite technology, these watches have the ability to sync with foreign time in a flash.

Citizen focuses mostly on releasing hi-tech watches. Therefore, when you use its products, you can always see the advanced signature features like alarm, 40 timezones world time setting, notifications of incoming calls (yup, they can also integrate with your phone), and so on.

This company was established in 1881 in Tokyo. It soon became a legend in the watch industry back there. People were so passionate about its timepieces that many other Swiss watch brands had to face difficulties due to the loss of customers.

The first watch of Seiko was the Seiko Astron. More specifically, it is also known as the world’s first quartz watch. Thanks to this great product, the name Seiko has spread out on the world market.

Some trivia fact. The Seiko brand gains its reputation fast due to the fact that it spends tons of money on marketing. Besides producing watches, Seiko also takes part in sponsoring for the football tournaments and the film firms.

In the past, Grand Seiko was an enterprise of the Seiko company. But nowadays, it worked on its own, providing many great watches to users around the globe.

This company focuses seriously on the quality of its products. Therefore, it is easy to understand that the price of its watches is clearly more expensive than those of Seiko.

From 2010, Grand Seiko has become a prominent figure in the world market and has come a long way to get a large number of customers. At Baselworld 2017, the Grand Seiko logo appeared at the 12 o’clock key position instead of the 6 o’clock position as before. This had an important meaning: From that moment on, the Grand Seiko will now have no relation to the Seiko Group.

One of the most popular watches in Japan is the Hajime Asaoka brand. The self-taught independent watchmaker, named Hajime Asaoka, started making watches after his successful career in product design. His first tourbillon watch was made in 2009 after four years of tinkering and researching in making watches.

In the following years, his watch producing career went on. Soon, he launched a massive collection from the three-handed Tsunami to the complex Tourbillon Pura to the open-worked dial Chronograph.

Established in 2005 in Akita, this brand soon got watch enthusiasts’ attention due to its exclusive yet limited watches. It is really hard to find another watch that has the same design as Minase’s.

At the G20 Summit in Osaka in June 2019, the Japanese Prime Minister Shizo Abe wore a Minase Divido. From that moment, the name Minaso became popular in Japan and found itself a huge amount of customers.

This brand has set his goal of delivering products with the greatest designs and quality. Therefore, its timepieces always receive tons of compliments from both the domestic market and the international market.

Showing up for the first time in the Japanese market in 2012, the brand Frank Miura has proved that it is not any regular watch brand. Not long after that, the watches made by this brand became famous quickly due to their simple but unorthodox design.

Frank Miura was one of the Japanese watch companies that compete directly with other Swiss watch brands.  The name Frank Miura is quite similar to Frank Muller – a brand in Switzerland. In fact, the company was accused of trademark violation and was sued more than once. But till the end, it has proved its monopoly and is able to keep the name.

Knot is a new entrant in the Japanese watch market. The company was founded in 2014 by Hiromitsu Endo. The purpose of Knot is to produce high quality, exquisite products but at a reasonable price. Therefore, Knot watches have attracted a lot of buyers and are popular to not only the domestic consumers but also the foreigners.

Besides coming with an affordable price, the high-class design of these timepieces is what draws watch lovers to them. Knot watches are made of stainless steel. They are not only designed with eye-catching designs but also the durability and function very well. Besides, being a famous brand, the movements of the hour hand, minute and second hands are very accurate.

G-Shock is a company owned and managed by Casio. This is one of the most reputable watches selling companies today. Their creations are available in shopping malls, watch stores, and appear on many social networking sites.

The first G-Shock watch was released in 1983 with a lot of functions. The product itself was strong, durable, and waterproof. Besides, it was made of impact-resistant and unbreakable material. In fact, the brand itself and its creativity had knocked many of its rivals as it got all the customers.

Currently, a G-Shock watch is updated with many new features such as atomic clock synchronization, solar technology, and even Bluetooth capabilities. It can be seen that the brand is constantly trying to improve and bring the best products to customers.

One thing is clear: Japanese brands are a major force in the watch industry. Many of the names on our list still dominate watch sales from low cost to high end.

In conclusion, these are a list of the 10 most popular Japanese brand watches nowadays. Different from the Swiss watch brands, Japanese watches have their own luxurious beauty technical excellence. The Japanese always try to perfect their products in the best way possible to satisfy their customers.